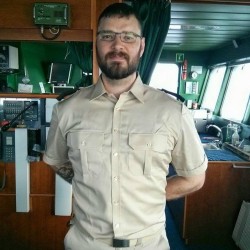 Edvin Dunaway
Senior Linux administrator and engineer at Landspitali – The National University Hospital of Iceland
Father, biker, veteran, rocker, cyberpunker, computerfunker, trucker and all around tinkerer.
Been working in the IT business since around '98 and survived multiple deployments down in the Mediterranean.

I’ve been wanting to streamline the process of how I set up a new workspace with all the base packages, programs, addons and dotfiles I use and need when I set up a new computer, so I decided to write a script that does exactly that for me.
Sure, I could use Ansible or Puppet and even just Git, to store, save and apply all my settings and programs, but you know.. I like shell scripts!
Also, this gives me the advantage to install everything without having to set up Ansible, Puppet or Git beforehand..

So, lets go over what the scripts do and what they install (the README.md in the repo goes into more detail, so make sure to read it)

The initial-package-install.sh script checks what Linux distribution I’m using (I only use Fedora and Ubuntu, so those are the only options, but it’s easy to add other distros if needed..), and based on that information, installs the corresponding packagebase that I’ve selected, along with Google Chrome and TeamViewer, so that I have the tools I need without having to install them all by hand.
The post-initial.sh script then installs all the snap applications that I want, some Python3 pip modules, my dotfiles (via stowit.sh which utilizes the stow command in a function), Oh-My-Zsh for zsh and lastly all the extensions that I use for VSCode and Gnome-Shell.

What to take into consideration before running these scripts

The scripts will keep on evolving and I will add new features as I need them to further streamline my workspace setup.
Go ahead and check out the initial-package-install script repository on my Github!

Backups with rdiff-backup and mysqldump

Backups October 19, 2019 • 0 Comment
I've been using rdiff-backup for my server backups along with mysqldump for the sql data for years now, as it…

This site uses Akismet to reduce spam. Learn how your comment data is processed.

This website uses cookies to improve your experience while you navigate through the website. Out of these cookies, the cookies that are categorized as necessary are stored on your browser as they are essential for the working of basic functionalities of the website. We also use third-party cookies that help us analyze and understand how you use this website. These cookies will be stored in your browser only with your consent. You also have the option to opt-out of these cookies. But opting out of some of these cookies may have an effect on your browsing experience.
Necessary Always Enabled
Necessary cookies are absolutely essential for the website to function properly. This category only includes cookies that ensures basic functionalities and security features of the website. These cookies do not store any personal information.
Non-necessary
Any cookies that may not be particularly necessary for the website to function and is used specifically to collect user personal data via analytics, ads, other embedded contents are termed as non-necessary cookies. It is mandatory to procure user consent prior to running these cookies on your website.
SAVE & ACCEPT